A Conversation with Dr. Ali Abdolali 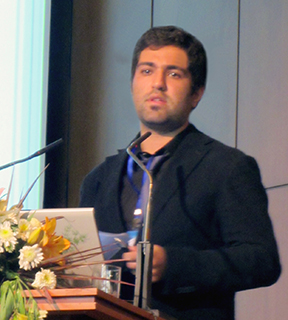 Q: What path led you to choose coastal and maritime engineering?

Ali: I have always had a passion for exploring such an unexplored part of planet earth: the mysterious oceans and seas. So, when I was admitted to university in Civil Engineering and then in Coastal Engineering, I felt quite satisfied with studying wave mechanics. As waves become larger like tsunamis, they are more catastrophic and devastating, and need to be investigated thoroughly! Looking along my path, it has been like a ladder, with the bottom rung being my interest in hydrodynamics, then stepping up to wave mechanics and tsunamis, with each step taking me further into the endless ocean. I am still on the lower rungs, but wish to continue ascending the ladder.

Q: How did you become familiar with the observatories and data at Ocean Networks Canada?

Ali: For a long time, we were looking for real data of hydro-acoustic waves generated by tsunamigenic events measured at deep sea to check our compressible numerical model. When the Haida Gwaii event occurred in October 2012, our research group was informed of ONC data. We checked and analyzed the data. It was a unique data set and a great chance for us to check our new derived equation (Sammarco et. al. 2013). So, we decided to start modeling the October 28 event. Later in November 2013, I met Kim Juniper and Scott McLean at the EMSO Ocean Observatories: Challenges and Progress (OOCP) Conference in Rome. It was a scientific meeting to share deep sea observatory technologies being implemented around the globe. I discussed our work with them and it was the beginning of our remote cooperation. Whenever we faced a problem with data, ONC people were there to help us. Eventually, it led to completion of our study with lots of constructive conclusions for our future work.

Q: Do you remember the tsunami workshop last March in Port Alberni, on the west coast of Vancouver Island?  What was it like coming together to share your research with other scientists from around the world?

Ali: The tsunami workshop at Port Alberni was the 50-year anniversary of the devastating tsunami event, gathering the leading tsunami scientists from around the world to share their recent achievements in tsunami modeling. It was surprising to meet all of them together in a professional atmosphere discussing specifically tsunami related topics. I always had this concern about the lack of such an event. We conducted friendly discussions for hours. After my talk on precursor component of tsunamis for enhancement of Tsunami Early Warning Systems (TEWS), I received many comments and much interest, which helped me a lot in determining my next steps. My research group later improved the model accuracy by taking the compressible viscous bottom layer into account (Abdolali et. al. 2015 a).

Q: Congratulations on your paper published in the AGU Journal of Geophysical Research: Oceans!  What is most important about this research to you? Was this paper also the foundation of your PhD thesis?

Ali: The MSEWC (Sammarco et. al. 2013) and MSEDWC (Abdolali et. al. 2015 a) numerical models which had been well-validated against available theoretical solutions and fully 3D numerical models, needed to be examined for large scale bathymetries and for real events.(for real events with large scale bathymetries?) From an engineering point of view, model promptness and accuracy for real applications were our main goals. So, we examined our numerical model for the Haida Gwaii 2012 event where we had ONC data and historical tsunami events in the Mediterranean Sea where EMSO had deep sea observatories (Cecioni et. al. 2015). Based on model results, we achieved a better understanding of phenomena. In other words, it sheds light on our ongoing research. The paper published in Journal of Geophysical Research: Oceans, is a chapter of my PhD. thesis that filled the gap between pure mathematics and engineering applications.

Q: How has the data and infrastructure from Ocean Networks Canada assisted your research?

Ali: There are few deep sea observatories around the world that are well-equipped with bottom pressure gauges and hydrophones and also with the required sampling frequency for my research. ONC infrastructure on the NEPTUNE sites provide unique datasets. It is really easy to access the raw data, visualize the data online and download them. In addition to the mentioned equipment, we needed to have seismograms close to the observatories to understand the sea bottom motion and water column behavior. Fortunately, ONC had deployed seismometers at NEPTUNE locations as well. Therefore, we could interpret different time series and draw their correlations.

Q. What is keeping you busy today?

Ali: After graduation from Rome 3 University in 2014, I started my research career as a post-doctoral research scholar at the Center for Applied Coastal Research (CACR) at University of Delaware. Here, I have the chance to work with Professor James T. Kirby who is a knowledgeable coastal engineer/scientist. Our work on hydro-acoustic waves as precursors of tsunamis, is ongoing as a cooperation between University of Delaware, Roma Tre University and University of Rhode Island. We are working on the application of models for tsunamigenic and submarine landslide events.

In addition to my work on tsunamis, I am involved in a project on nearshore hydrodynamics at Bombay Hook Marshland, covering extensive numerical modeling and field work. I am also still working on Wave Energy Conversion (WEC) devices as an environmentally friendly renewable energy source, which is a world concern.