The Coriolis Effect causes atmospheric and oceanic circulations to veer from linear (straight) trajectories and is due to the rotation of the Earth. The figure below shows the rotating Earth, and what would happen to a projectile that is “launched” from point P (North Pole) towards point A. As the projectile travels, the Earth rotates underneath it, and observers at any location on the Earth would claim that the projectile veered from a straight line.

From the North Pole, all directions are southward, and the projectile is seen to veer to the right (which is to west). From the south pole, a moving object would seem to veer to the left (also to the west!). Newtons laws tell us that a change in direction is an acceleration, and we call the force causing this acceleration the “Coriolis force”.

At mid-latitudes, there is a similar effect, but as the force acts only in the ecliptic plane, it becomes weaker the closer one gets to the Equator, where the horizontal component of the force becomes zero. In fact, one can show that the force is proportional to Sine(Latitude) times twice the rotation rate of the Earth, such that the sine function is positive in the northern hemisphere and negative in the southern hemisphere. Sine of zero (Equator) is zero, and the Coriolis effect disappears along the Equator. However, a projectile moving from the equator to either pole will again come under the influence of the Coriolis force and veers to the east, regardless if heading north or south. 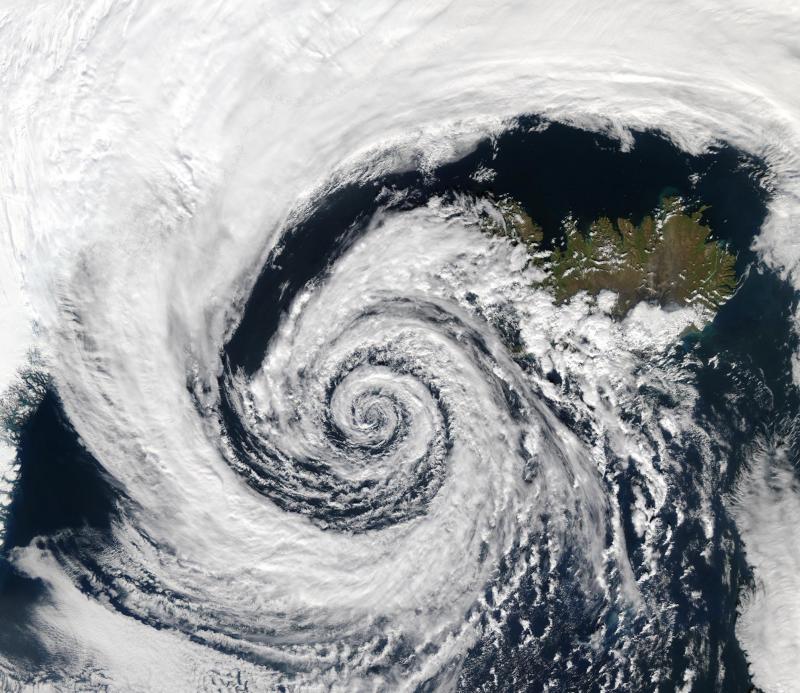 In this case, the flow is said to be in “geostrophic balance”, and will persist in a rotational (cyclonic) pattern, counter-clockwise around a low pressure region in the northern hemisphere and clockwise in the southern. Around a high pressure zone the circulation is anti-cyclonic; clockwise in the northern hemisphere and counter-clockwise in the southern. It is geostrophic flows which cause storms (see satellite image to the right) and hurricanes to spin, and is the dynamics behind the “red spot” storm on Jupiter.