The archipelago of Haida Gwaii, home of the Haida Nation, is well known for its highly sensitive and rich ecological and cultural environments. Haida Gwaii’s rugged coastlines and remote location make it particularly vulnerable to marine traffic. As shipping and ocean-based industries continue to grow, understanding and monitoring vessel activity is an important step towards advancing environmental stewardship, resource management, and marine safety. 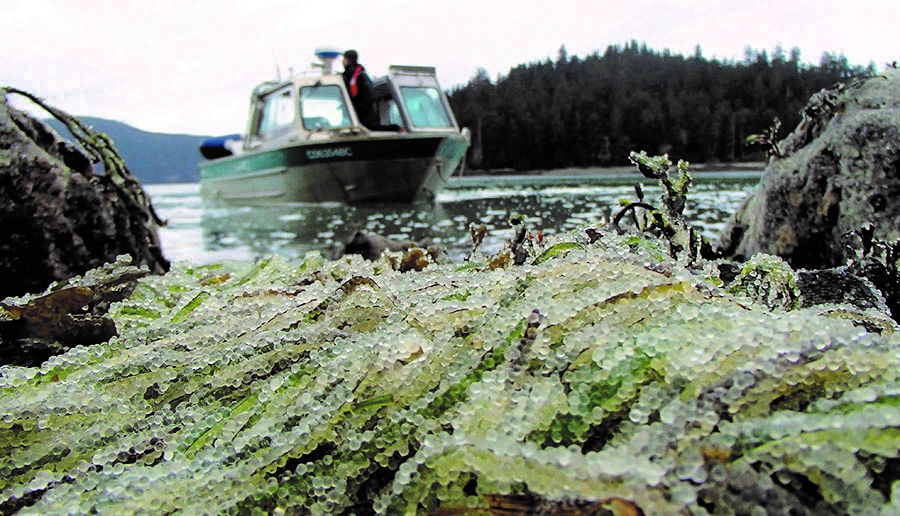 Figure 1. A small vessel in Gwaii Hanaas, with herring spawn on kelp in the foreground.

In 2020, the Council of the Haida Nation partnered with Ocean Networks Canada (ONC) to expand monitoring of small vessel traffic in Haida territorial waters. Working closely with the Haida Nation, ONC facilitated access to the Canadian Coast Guard ship traffic data from their automatic identification systems, providing a suite of data products that quantify small vessel movements and fishing activity that occurred around Haida Gwaii in 2018. The methodology includes data summaries along with ship track data files (Figure 2) and density maps (Figure 3). The Council of the Haida Nation is now using these products to support additional small vessel traffic studies.

“The 2018 small vessel traffic study prepared in partnership with Ocean Networks Canada has provided the Council of Haida Nation with historic information that supplements the near real-time data that is gathered from the Enhanced Maritime Situational Awareness system, co-developed by Transport Canada and 13 Indigenous partners, including the Council of Haida Nation,” comments Olivia Choi, project manager, Council of the Haida Nation. “This study contributes to the development of a Haida Gwaii monitoring plan to increase and support initiatives aimed at protecting Haida Gwaii from shipping-related impacts.” 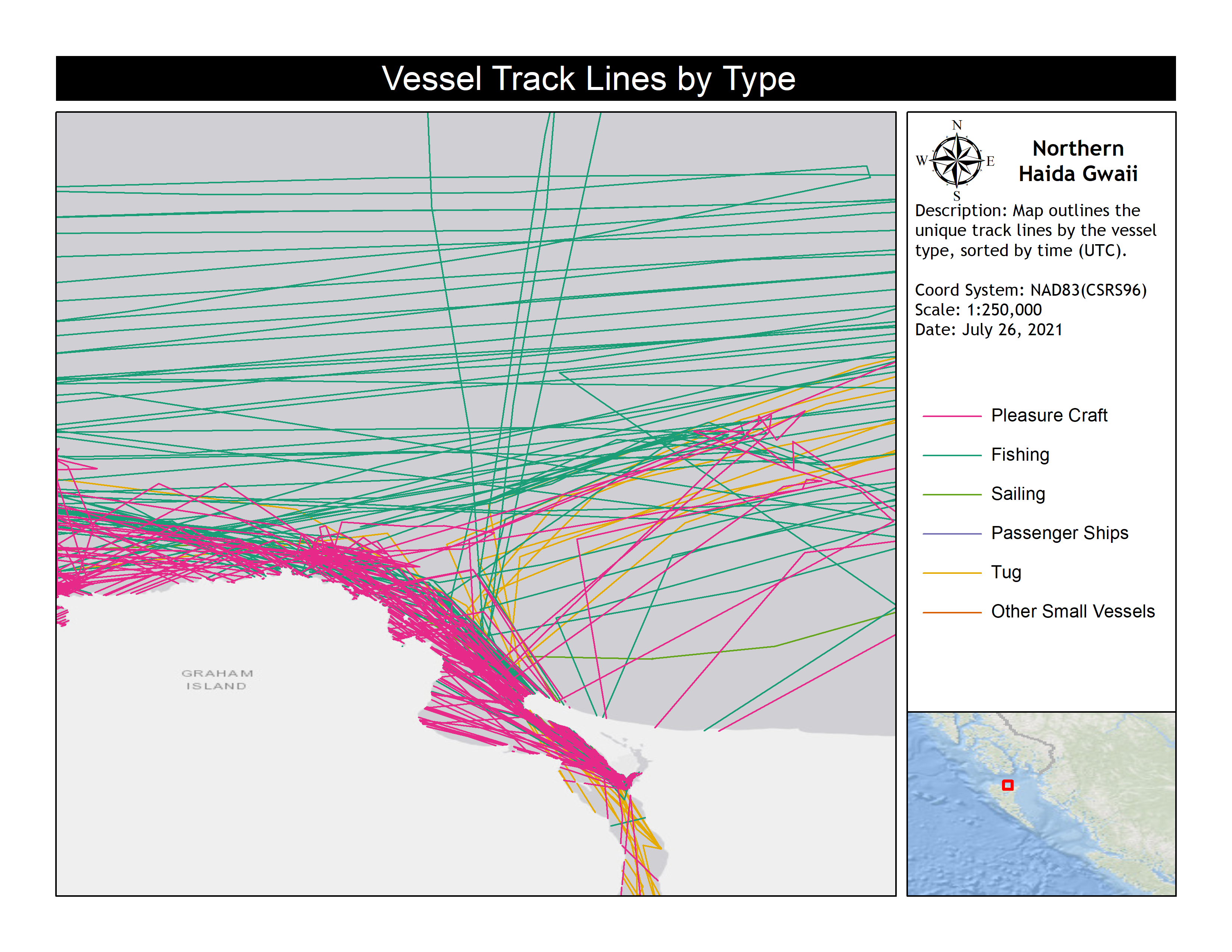 “ONC was tasked with transforming these vast quantities of data into a manageable number of points, without losing the resolution required to address the Council of the Haida Nation’s research objectives,” comments ONC community support specialist and project lead Lucianne Marshall. “Through ongoing discussion between our two teams, we were able to condense the data effectively and produce several meaningful visualizations and data summaries.” 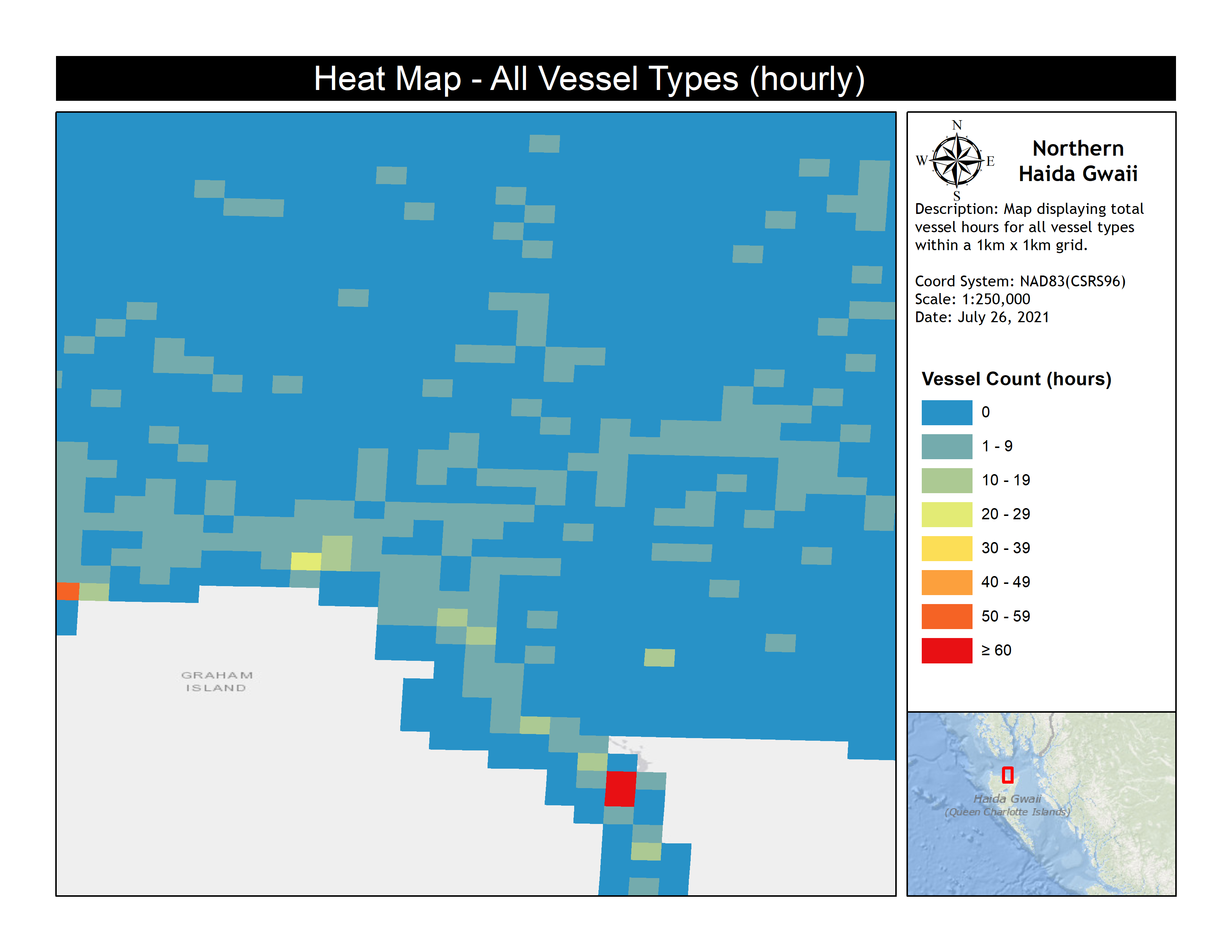 Figure 3: Example of monthly data from 2018 of vessel density off northern Haida Gwaii. The colours represent total hours of all small vessels within a one-square-kilometre grid.

Arriving at conclusions to the Council of the Haida Nation’s questions required clear definitions and boundaries on how the complex and often nuanced data could be interpreted. “The main challenge for the ONC team was how to define a ’trip’ for a particular vessel,” says Marshall. “Resolving this was highly rewarding, as it cultivated a collaborative working relationship between our two teams that resulted in the production of higher quality data products.”

One way the Council of the Haida Nation has used this data is to identify ‘hotspots’ for small vessel traffic. These high density areas are used to prioritize sites for a non-Automatic Identification System small vessel traffic study, which is being piloted during the 2021 recreational boating season. The installation of wildlife cameras in high traffic locations will allow the Council of the Haida Nation to assess the differences between near-real time Automatic Identification System data and actual ship traffic in nearshore areas.

“Our hope for the future is to continue to make these data accessible to the Council of the Haida Nation in a useful way, support ongoing community-driven research initiatives, and maintain this strong and valued partnership for years to come,” says Marshall.

To learn more about marine shipping and safety in Haida Gwaii, visit: https://haidamarineplanning.com/initiatives/marine-shipping-and-safety/