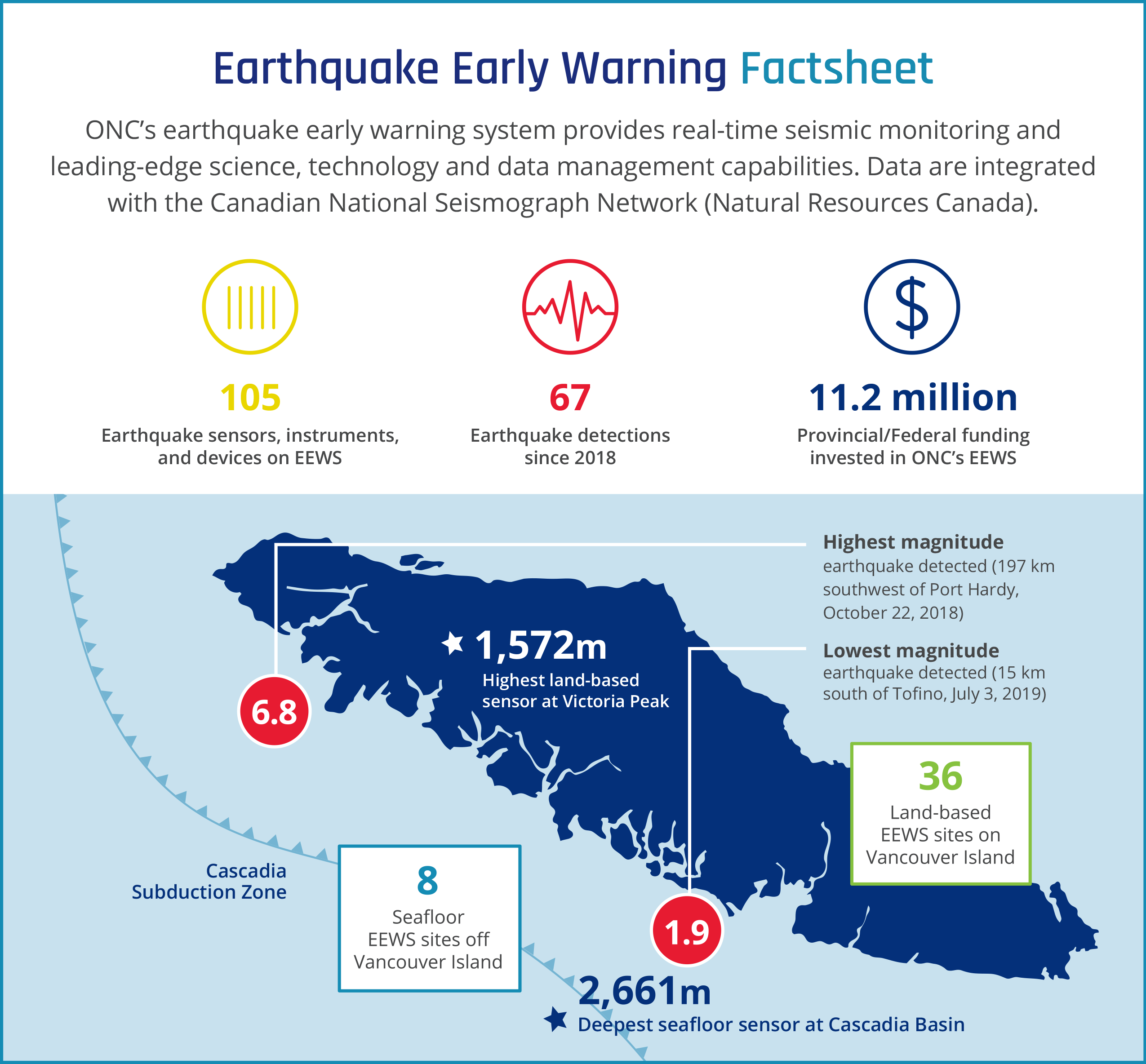 The potential for earthquakes in British Columbia

British Columbia is located on the Pacific Ring of Fire, an active seismic region. Thousands of, mostly small, earthquakes are recorded annually by seismic sensors located across the province.

Many earthquakes occur near the Cascadia Subduction Zone, where the Juan de Fuca and North American tectonic plates converge. Also known as the Cascadia fault, this area is capable of producing megathrust earthquakes, like the one that happened in Japan in 2011.

See Ocean Networks Canada's (ONC's) Earthquake Data Dashboard to get a sense of earthquakes occurring around the world and in British Columbia. 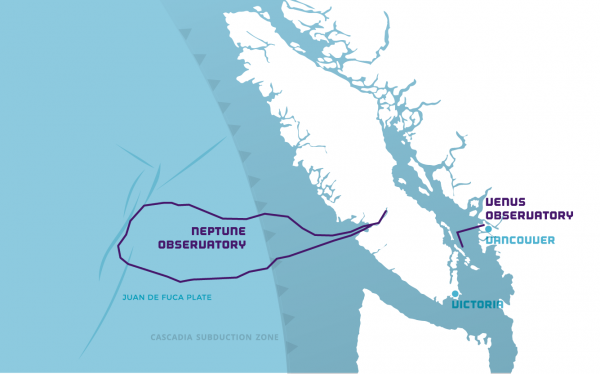 The Cascadia Subduction Zone is a boundary between tectonic plates where denser oceanic plates (mainly the Juan de Fuca Plate) move under the continental North America Plate. It is a region that roughly extends from where the plates first meet on the seafloor past the volcanic arc to the east of the major coastal cities. The subduction zone stretches from northern California up to northern Vancouver Island.

The Cascadia Subduction Zone is not the only area in BC that has the potential to cause a damaging earthquake but it does represent a large proportion of the risk, especially in southwestern BC. It is from this area that the so-called “Big One” will occur.

How does earthquake early warning work?

There are currently no known means to reliably predict earthquakes, however seismic instruments can rapidly detect an earthquake as it begins to unfold and communicate a warning before shaking arrives.

Earthquakes release energy that travels through the Earth as seismic waves. Primary or ‘P’ waves travel faster than secondary or ‘S’ waves. The latter are the cause of severe damaging ground shaking. It is the ability to detect these first ‘P-waves’ that enables earthquake early warning systems to deliver alerts before the arrival of the ‘S-waves’.

The detection of an earthquake by many sensors can provide rapid estimates of the location and magnitude of an earthquake as it occurs. This information can be used to determine the estimated arrival time and intensity of ground-shaking at specific locations across a region, allowing protective actions to take place before the shaking hits.

What are the benefits of earthquake early warning?

Rapid alerts that signal incoming earthquake ground shaking can reduce deaths, injuries and property losses. Even a few seconds of warning are enough time to take protective and preventative measures, such as:

What you need to know about earthquake early warning?

The amount of warning time depends on the speed of the earthquake early warning system and the distance from the earthquake to the warning area. To maximize warning time, Ocean Networks Canada will focus on setting sensors as close to the Cascadia Subduction Zone as possible and on minimizing delays in data processing, communication, and delivery of warnings.

False alarms may result from technical failures or miscalculations. This potential will be lessened with a dense network of earthquake sensors and improving system performance with thorough testing. Accordingly, the warning system’s accuracy will grow with the number of sensors installed and regular testing to further improve the alerts. Global Positioning System receivers will be co-located with the seismic sensors to further refine the magnitude of the “Big One”. (see map below)

Ground composition, site conditions, and topography also have an influence on the accuracy of the seismic intensity estimate.

Why is Ocean Networks Canada involved?

Ocean Networks Canada operates real-time sensor networks underwater and on land using an advanced data management system, “Oceans 3.0”. ONC also has the capability to deploy sensors close to the Cascadia Subduction Zone. This proximity to the fault adds valuable warning time to decision makers and for those in harms way.

By the end of 2022, ONC will have completed the commissioning of the system and will be in a position to start delivering earthquake notifications to service subscribers, including operators of critical infrastructure and government organizations.

This automatically updating map outlines the installed and planned locations for sensor installations relative to the Cascadia Subduction Zone.

Who else is involved?