Clayoquot Slope at a Glance

The Clayoquot Slope is a zone where sediment accumulates in an accretionary subduction setting. The sediments of the subducting Juan de Fuca tectonic plate are scraped off and accreted to the North American plate as the plates converge.

As sediments thicken and compact from accretion, pore waters and gases are expelled from the sediment, forming cold-water vents such as the Bullseye Vent, as well as gas hydrate deposits and gas seeps.

Ocean Networks Canada’s Clayoquot Slope site is home to a variety of deep-sea organisms, and recent dives have observed a number of demersal fish – which feed along the seafloor – such as rockfish, flatfish, thorny heads, and rattails (image below), along with echinoderms, molluscs, arthropods, cnidarians, and the bacterial mats found around methane hydrates. 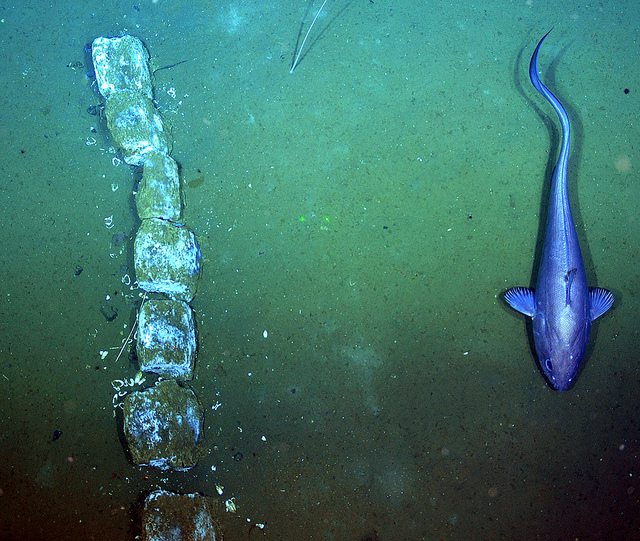 Clayquot Slope is located in the region of the highest predicted rate of fluid escape from compacting the sediments of the accretionary wedge. The released fluids contain methane that forms hydrates in the top few hundred metres of the sediments, and they have a strong influence on the biology, geology, and potentially even climate.

A series of scientific drill holes exist in this area (the oldest one called ODP 889 which added a historic name to this site), and 2 of which are filled with strings of instruments extending a few hundred metres into the sediment. These instruments are currently recording automonously but both may potentially be connected to the NEPTUNE observatory to stream live data.

The region around Clayoquot Slope exhibits the highest density of seeps with regular activity of gas venting into the water column. One area, dubbed 'Bubbly Gulch', is closely monitored using a sonar, and nearby sensors are measuring tidal pressure, temperature, currents, ground shaking (seismic activity), and even hydrogeological conditions within the sediments. This instrument suite affords a unique opportunity to study trigger mechanisms for natural venting and vent bursts. Escaping gas bubbles rise through the water column with a thin coating of hydrate surrounding the gas, heading toward the atmosphere where they could act as a powerful greenhouse gas, though they have not been observed to rise above depth less than approximately 500 m below the sea surface in this region.

To monitor the physical dynamics of the gas hydrates associated with the Bullseye cold vent, there is a Controlled Source Electromagnetic (CSEM) experiment, the world's first to be connected to an ocean observatory, currently (2013) recovered for maintenance, and a SeaFloor Compliance (SFC) apparatus with the world's first gravimeter to stream live data from the ocean floor, though the latter is slated for relocation to our Endeavour site on the Juan de Fuca ridge.

Since the Cascadia margin is subject to regular giant megathrust earthquakes (with a 300-500 year recurrence rate), close observations of the stress regime with hydrogeological pressure monitoring in the boreholes will provide a unique opportunity to detect any changes associated with these subduction events.

Research at Ocean Networks Canada’s Clayoquot Slope revolves largely around the presence of gas hydrate deposits and the proximity of seafloor boreholes, which were drilled by the Integrated Ocean Drilling Program (IODP) in collaboration with Ocean Netowrks Canada. Used mainly for studies on seafloor dynamics, research findings have helped illuminate the parameters surrounding the large “megathrust” earthquakes which tend to occur every 300-500 years along the Cascadia subduction zone.

Methane bubbles from the seafloor at ONC’s Clayoquot Slope