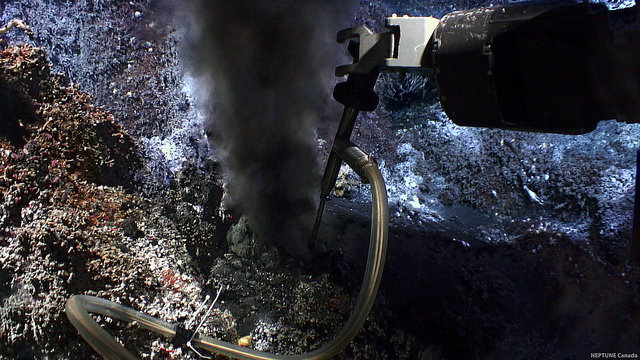 Endeavour at a Glance:

Map of Ocean Networks Canada installations along the Endeavour segment of the Juan de Fuca mid-ocean ridge in the Northeast Pacific. Click to enlarge.

The hydrothermal vent ecosystem found at the Endeavour segment of the Juan de Fuce mid-ocean ridge, formed from the pulling apart of the Juan de Fuca and Pacific plates, is characterized by extreme environments and unique organisms.

As the plates recede from one another, new oceanic crust is formed, giving rise to a chemically and geologically active region on the seafloor. Riddled with cracks and fractures, cold seawater percolates downwards towards the hot mantle, where it undergoes physical and chemical transformations before being vented back towards the seafloor.

This superheated (300°C-400°C), sulfide-rich fluid, upon contact with the surrounding cool seawater (2°C), sees its dissolved minerals precipitated out of solution, forming towering chimneys of minerals such as sulphide. As the fluid vents, the sulphide and other heavy minerals give it the look of black ‘smoke’ so they are known as ‘black smokers’ on the seafloor.

At a depth of over two thousand meters, around these seemingly uninhabitable chimneys of superheated, mineral-rich fluid, scientists have discovered –and continue to discover – an astonishing array of life. 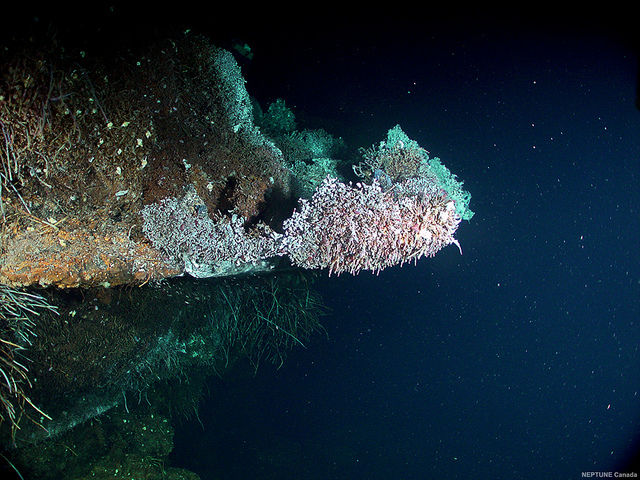 What Makes the Endeavour Observatory Unique?

Classified as a Marine Protected Area in 2003, the Main Endeavour Vent Field (MEF) is the first protected marine area in Canada, and the first hydrothermal vent ecosystem protected in the world.

Altogether devoid of sunlight, and therefore too deep for photosynthetic organisms (such as plants and algae) to survive, deep-sea hydrothermal vent ecosystems are sustained instead by chemosynthetic organisms. These organisms use energy from the chemical reactions occurring as superheated (300-400°C), mineral-laden hydrothermal fluid mixes with seawater (2°C), producing organic matter which then feeds a host of unique consumers higher up the food chain.

The result of this strange relationship is an entirely new type of ecosystem, vibrant yet alien, and populated by many species which exist nowhere else in the world.

Home to an array of unusual and endemic species, Ocean Networks Canada’s Endeavour site then is uniquely positioned and expertly equipped to study this ecosystem and its dynamic physical and chemical characteristics. 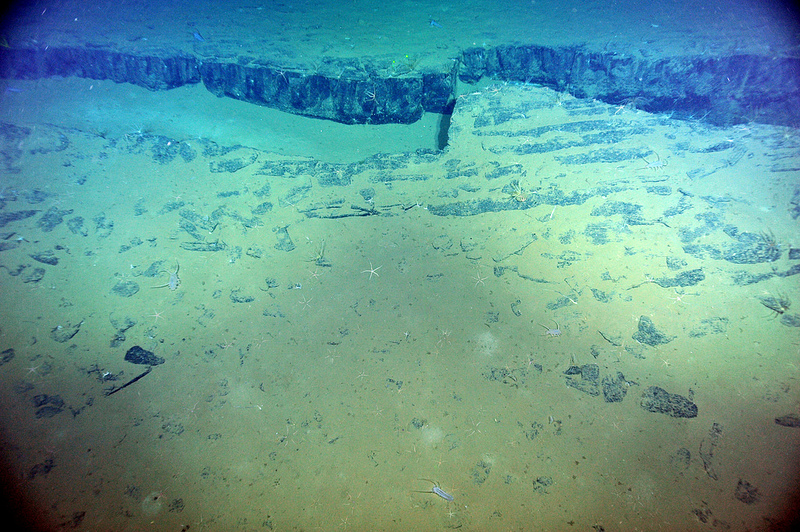 Monitoring Endeavour-Middle Valley Hydrothermal Systems, a research project led by Kathryn Gillis, serves to monitor both the spatial and temporal variability associated with seafloor spreading, and the variability in biogeochemical and physical processes associated with hydrothermal vent fields. Constantly evolving, other research projects utilizing the Endeavor site can be found below:

What will researchers be studying along the mid-ocean ridge?

What new instrumentation will support future research at Endeavour?

The Endeavour segment of the Juan de Fuca mid-ocean ridge was likely named after the Canadian Navy Auxiliary Vessel (CNAV) Endeavour, after its identification by Sandra Barr and Richard Chase in1974. This vessel, in turn, was named after British explorer Captain James Cook's ship the HMS Endeavour. See the Frequently Asked Questions page for additional information.