In March 2016 Ocean Networks Canada installed a community observatory within Ts’msyen Territory, on the west side of Digby Island near the Prince Rupert YPR airport. This observatory is equipped with a shore station that has a weather station and shore camera. The shore station is cabled to subsurface instruments that track and record local water quality, underwater sounds of marine mammals and vessels, and live stream video from an underwater camera. In addition, this location is equipped with a High Frequency (HF) RADAR (CODAR) system capable of measuring surface current speed and direction, as well as an Automatic Identification System (AIS) antenna to track large vessels in the region.

Ocean Networks Canada also installed instrumentation at a second location on the west side of Ridley Island. The installation has a second HF RADAR system that when triangulated with the Digby Island RADAR produces surface current maps that can extend out approximately 20 – 30kms.   An X-Band RADAR (WaMos) is also co-located at this site, producing a shorter range but higher resolution picture of wave heights, direction and period in addition to surface current maps. A second shore station hosts a weather station, a shore camera and AIS antenna at Ridley as well.

The network in Prince Rupert is expanding through the partnerships being established in the region and the collaborative engagement through the Port Environmental Stewardship Committee. The Prince Rupert Atlin Terminal Station is an example of the coordinated efforts to improve our understanding of the region. Ocean Networks Canada and the Prince Rupert Port Authority deployed the water quality sensor to add additional scientific data from the harbor. The parties look forward to working with others on continued long term data collection. 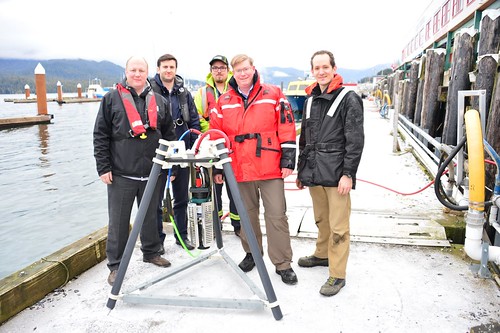 State of the Ocean Ridley Island: All instruments are working properly and the data are reliable.

Digby Island: All instruments are working properly and the data are reliable.

​Prince Rupert Atlin Terminal: All instruments are working properly and the data are reliable.