The objective of MicroSquid project is the collection of continuous measurements of oxygen uptake by the seabed in Saanich Inlet, British Columbia. The work is an exceptional international collaboration and is adding pioneering capabilities to the VENUS cabled ocean observatory. The partners in this research are scientists, technicians, and engineers from Oregon State University' Reimers Lab, Rockland Scientific (BC, Canada), and Ocean Networks Canada.

This research focuses on understanding what drives changes in benthic oxygen flux, which is a measure of how much oxygen sediment biota consume from the overlying water. Concurrently, we are testing a new instrument’s ability to collect data via an ocean observatory system.  This instrument is called the "microSquid”. It was engineered at Rockland Scientific (Victoria, BC, Canada) to provide high speed measurements of water velocity, dissolved oxygen and temperature that can be used to derive fluxes by an approach called eddy correlation. Historically, eddy correlation systems have been deployed autonomously where batteries and data storage is always a limiting factor (two day maximum of data with an external battery). The observatory technology allows the investigators to make measurements over longer periods (weeks to months) and to manipulate the settings of the instrument during deployment. 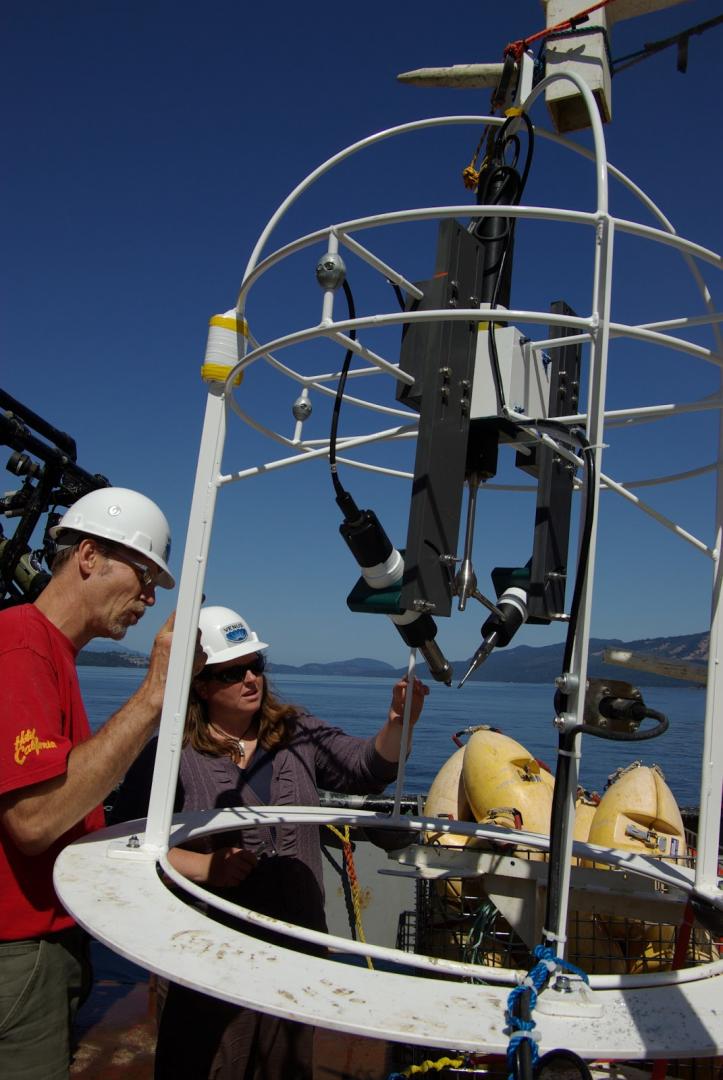 Dr. Clare Reimers, Oregon State University, is the Principal Investigator for this project. Clare has spent her career investigating sediment biogeochemistry and the impact of benthic fluxes on ocean chemistry. The deposition of organic matter and its decomposition by bacteria at the seafloor are important pieces of the larger global biogeochemical puzzle. Combined aerobic and anaerobic benthic respiration rates can be inferred from the rate of oxygen uptake by some marine sediments, but in seasonally hypoxic settings such as Saanich Inlet, these processes may become decoupled. Clare, and OSU research assistants, Rhea Sanders and Kristina McCann, are currently involved in studies on the Oregon continental shelf where hypoxia driven mainly by upwelling processes occurs. Additional processes such as intense wave motions, pore water advection, and bioturbation make the Oregon shelf an interesting comparison location to Saanich Inlet.

Saanich Inlet experiences seasonal hypoxic events.  The site is a much less energetic site with respect to wave motion and bottom water movement compared to highly dynamic Oregon coast study sites. This gives the team an opportunity to focus on changes caused by variability in bottom water oxygen concentrations rather than in physical dynamics.

What is the daily benthic oxygen flux of Saanich Inlet on the cusp of the hypoxic zone (104 m) and how does it change seasonally?  Can an Eddy Correlation System be successfully supported by an ocean observatory system?

The first deployment of MicroSquid coincided with a long-lasting seasonal hypoxic event in the Fall of 2012. Unfortunately, the oxygen sensor was broken (probably by a fish) before the oxygen rebounded. The MicroSquid was redeployed in early May 2013. Scientists are experimenting with a new kind of oxygen sensor, the AMT sensor, which they hope will prove to be more robust for longer deployments.  Furthermore, they are attempting to find the optimal instrument/sensor mounting configuration and data recording settings.

The current installation is an invaluable test-bed for oxygen flux measurements at future ocean observation sites world-wide. Saanich Inlet has unique physical and chemical cycles that may be subject to climate change in future decades. Scientists hope to contribute an understanding of the dynamics of benthic oxygen consumption to the overall perception of Saanich Inlet biogeochemical processes.