Ocean Networks Canada maintains several observatories installed in three different regions in the world's oceans. All three observatories are cabled systems that can provide power and high bandwidth communiction paths to sensors in the ocean.  The infrastructure supports near real-time observations from multiple instruments and locations distributed across the Arctic, NEPTUNE and VENUS observatory networks. Major components of our network were designed, manufactured and installed under contracts with Global Marine Systems Ltd, OceanWorks International, and Alcatel-Lucent Submarine Networks. These include the:

The infrastructure is broken down into two groups:

Each shore station has power feed equipment that converts the utility AC power to high voltage DC.  The backbone cables are run at 1,200 to 10,000 V DC depending on the length of the backbone cable.  Network equipment in the shore stations handle routing, switching, optical multiplexing and precise time synchronization within the network.

The backbone cables carry both power and fibre optic communications across the network. In the NEPTUNE Observatory, the backbone cable is run in a large loop.  Data is passed in both directions along the loop ensuring a communication path should the backbone cable be damaged or cut.  The NEPTUNE backbone cable is approximately 800km long, VENUS Strait of Georgia is approximately 40km long and VENUS Saanich Inlet is 3km long.  Different grades of armoured submarine cable are used for the various locations on the observatories, depending on depth and roughness of the seafloor. For example, where the seafloor is very rocky or jagged an armoured cable will be required.

The optical signal is degraded as it travels along the backbone cable. On the NEPTUNE observatory, repeaters (optical amplifiers) are used at regular intervals to boost the optical signal to prevent data loss.

On the NEPTUNE Observatory, branching units distribute power and communications (via optical couplers) from the backbone to spur cables which connect to the nodes.

Nodes serve as the link between the Primary and Secondary infrastructure.  The nodes convert the high voltage used on the backbone cables down to the level needed by the junction boxes/SIIMs and instruments.  The nodes monitor and control the power and bandwidth use of the secondary infrastructure through a number of science ports on each node.  Each science port supports one or more junction boxes/SIIMs and associated instruments. 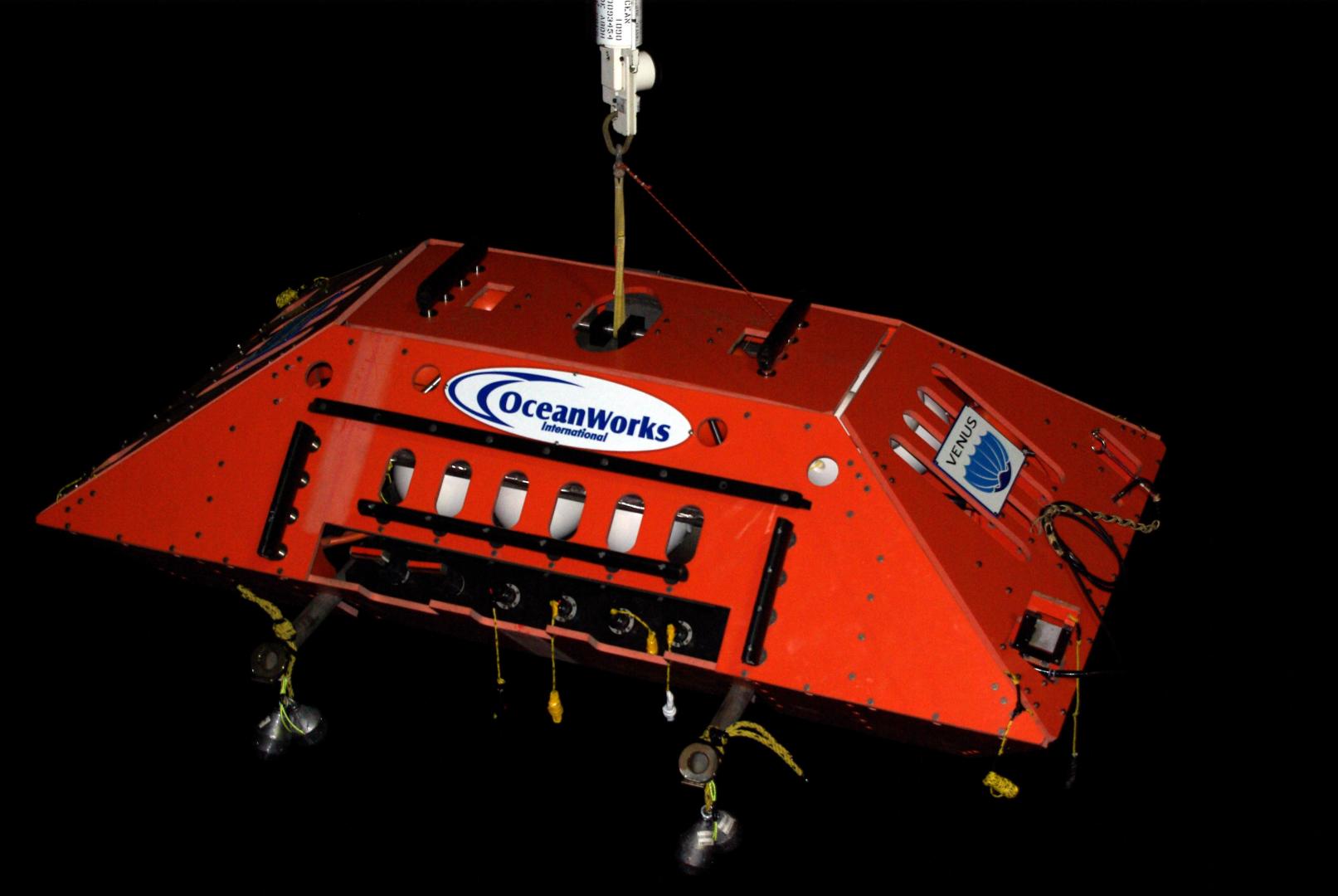 Photo caption: A node pod from the VENUS observatory is lowered to the seafloor over the side of a ship. 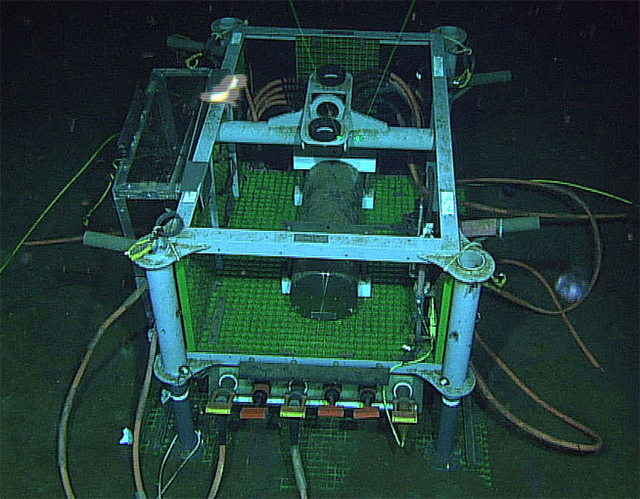 Photo caption: A junction box (silver cylinder) is mounted on an instrument platform. The various cables connect the junction box to instruments and to the node. This platform is part of the NEPTUNE observatory. 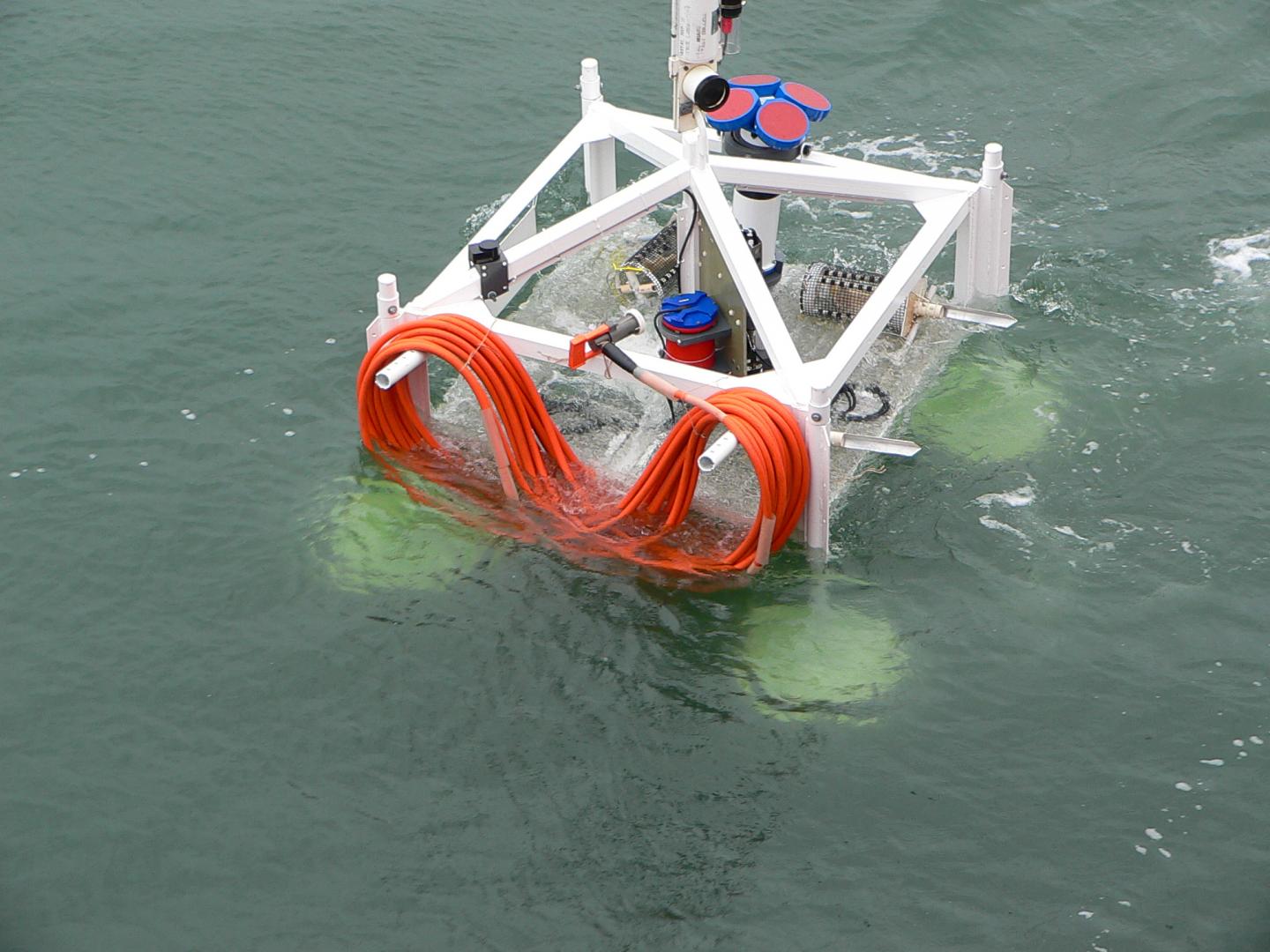 Photo caption: An instrument platform, part of the VENUS observatory, with a SIIM and a variety of instruments attached is lowered over the side of a ship for installation on the seafloor.

Collecting the data from the ocean are the instruments. These instruments may be attached to an instrument platform or are connected to the instrument platform by extension cables. These "satellite" instruments can collect data far from a junction box or node in an undistrubed area of the ocean. The vast majority of the instruments connected to the observatory collect data in near realtime and transmit it back to shore, accessible via the Internet, for immediate analysis. There are some instruments, however, connected to the observatory that are not capable of sending near realtime data, but instead record the information in data loggers within the instrument. During installation and maintenance dives, the data loggers can be collected by the ROV and the data retrieved prior to returning the data loggers to continue collecting data. Other instruments, like the sediment traps, collect physical samples that are recovered during maintenance cruises offshore. The wide variety of instruments includes chemical sensors, temperature probes, current meters, seismometers, bottom pressure recorders, still and video cameras, and even remotely operated vehicles.

Photo caption: Examples of some of the oceanographic instruments used throughout Ocean Network Canada's observatories.