Endeavour (depth 2200-2400 m) is a northern segment of the Juan de Fuca Ridge which, in turn, is part of the complex, 80,000 km long mid-ocean ridge system spanning the World Ocean. Juan de Fuca Ridge is a medium rate spreading centre (~6 cm/yr) forming the divergent boundary between the Pacific (to the west) and the Juan de Fuca (to the east) tectonic plates. At these divergent boundaries, convection currents in the mantle rise up as magma, emerge through the rifts as lava, and crystallise as new rock (basalts and gabbro). These processes continually create new ocean crust. Hydrothermal vents, which typically form along these mid-ocean ridges, are fissures from which geothermally heated water flows. The water flowing out of vents is dominantly seawater drawn into the system through the faults, porous sediments, and volcanic rocks. As the cool seawater moves through the sediment and rock towards the hot magma, the water becomes super heated (300-400°C) and rich in dissolved mineral elements (such as sulphur, iron, zinc and copper) from the young ocean crust. When the hot effluent is expelled, it encounters the cold, ambient seawater (about 2°C) minerals precipitate from the element-rich vent water. At the Endeavour segment, a notably vigorous venting area, black smokers form at the high temperature vents, where the effluent is precipitating iron sulphides. This gives the plume its dark colour and deposits sulphide-minerals, creating chimneys up to 30 m in height. There are 6 known vent fields with distinct morphologies spaced about 2 km apart along the axial rift valley of the segment.

These tall sulphide chimneys (hydrothermal vents) host some very unique ecological communities. While most of the deep sea depends on near-surface productivity with photosynthesis as its fundamental energy source, vent communities are completely independent from the surface and sunlight. Bacteria are able to use reduced compounds from the vent effluent as an energy source (chemosynthesis). These bacteria can be free-living or symbiotic and are the base of the food web of these communities where 90% of the species are endemic to this special environment. The tubeworm Ridgeia piscesae grows in large colonies in diffuse venting areas, supported by the symbiotic chemosynthetic bacteria developing in their cells. These worms have no mouth and rely on their internal symbiotic bacteria to survive. Other species living within hydrothermal communities include limpets, worms (scale worms and sulphide worms), fish, and sea spiders.

Once the vents were discovered in 1982, scientists began to explore the area. Their data has assimilated into a database that Ocean Networks Canada can display. Discover the changes in exploration and see if you can find the next unknown species. Click here to view the map. 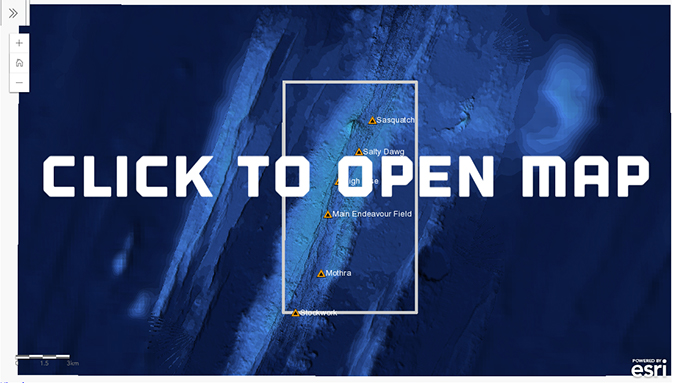