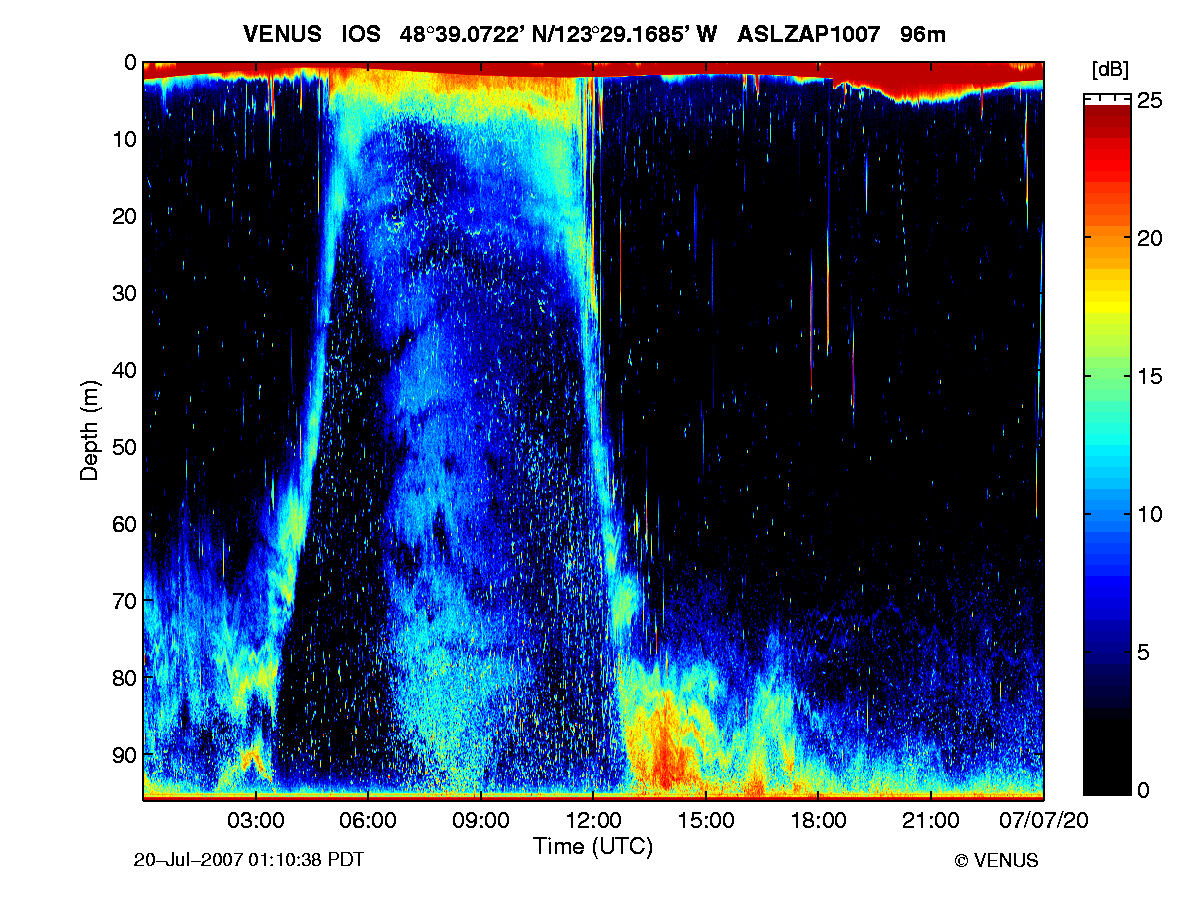 In the terrestrial world, we rely heavily on optics and our vision, and less so on acoustics and hearing. In the ocean, the opposite is true. In coastal waters, light only travels relatively short distances (5-20m), so marine animals use light for sensing only the very near-field environment, while sound can travel huge distances (1-1000km), and informs marine animals of distant features and events. Marine scientists also take advantage of the efficiency with which sound travels in the ocean, and use it to both investigate and listen to phenomena over long distances.

Waves can take on many forms, such as the surface gravity waves on the ocean, transverse waves along a string, electromagnetic radio waves in the atmosphere, or compression sound waves. When a medium (gas, liquid, or solid) iscompressible, then it will support the propagation of sound waves. Here is a simple animation of a compression, or longitudinal wave. One can think of a sound wave as a perturbation of alternating regions of compressed and decompressed molecules of the medium, that propagates along, as one front of molecules presses against the next, which then press against the next, and so on. So a sound wave is a pressure wave, and although the molecules move back and forth very slightly as the wave passes by, the pressure pulse propagates a long way while the atoms remain at their original location.

The more dense the medium, the fast sounds waves propagate. In the ocean, sound travels at roughly 1500 m/s, over 4 times the speed of sound in air (340 m/s). Variations in the seawater temperature and pressure (depth) also cause small variations in the speed of sound, and can result in complex and refracted propagation paths over long distances. Just as we can hear low and high sounds, sound in the ocean is made up of both low and high frequency waves. Low frequency sound physically has longer wave lengths, requires more energy to generate, and will consequently travel greater distances with little degradation. High frequency sound (i.e. >100 kHz) on the other hand has smaller wave lengths and will not propagate as far, but will allow the detection (reflect off) of smaller features. Low frequency sound is used to communicate over long distances, while high frequency sound is used to probe the local environment.

When sound encounters an obstacle, or travels through the stratified ocean, several things can happen. Upon reaching a suspended solid (plankton, fish, debris), some of the sound is scattered, either in the forward or oblique directions (diffraction) or back towards the source (backscatter). When sound encounters a fixed surface (i.e. the ocean surface or bottom), most of the sound energy isreflected. The ocean is not homogeneous, in that the sea water temperature (T), salinity (S), and density (ρ) vary in space. Consequently, the speed of sound (c), varies spatially as a complex function of T, S and pressure (P).

Just as we might use a flash light to illuminate our surroundings when it’s dark, scientists use active sonar systems to penetrate into the ocean to investigate features hundreds, and even thousands of metres away. A transducer is both an underwater speaker and microphone, and is used to both transmit and receive an acoustic signal. Among the various techniques, transmitted signals can be simple monotonic pulses of sound, or pulses making up complex codes(somewhat akin to Morse code). Such pulses travel and radiate away from the transducer, reflect off of objects and structures in the ocean, and then propagate back towards the same transducer where the returning pressure waves are detected. For simple echo-sounder systems, the received monotonic echo is characterized by its intensity only, as a measure of how efficient or large the scattering (reflection) process or object was at that particular frequency. Shown above is an echo-sounder image from the Zooplankton Acoustic Profiler (ZAP) in Saanich Inlet. For more complex transmissions (i.e. from an Acoustic Doppler Current Profiler), the sequence of sound pulses make up a code whose returned integrity can be analyzed for variations such as a Doppler shift.

Hydrophones If the receiver does not transmit but only records the received pressure waves, then it is effectively an underwater microphone, which we call a hydrophone. Hydrophones are used to research the many naturally occurring sounds in the ocean. These include wind, waves, and precipitation on the ocean surface, ship and boat engines, and marine mammals, that use acoustics to both echo-locate food and communicate. The hydrophone arrays on VENUS can consist of several co-located receivers, whose signals can be combined to form a directional antenna. The received audio signals can be converted into files for listening (i.e. MP3), or analyzed for their frequency content and displayed as a spectrogram.