Victoria is infamous for its practice of discharging screened, but otherwise untreated, municipal sewage into Juan de Fuca Strait. Starting in early 2013, Ocean Networks Canada (ONC) has been partnering with Victoria’s Capital Regional District to help measure the impacts of their outfalls on the local marine environment.

With ONC’s help and expertise, two special purpose bottom moorings capable of measuring the salinity, temperature, and amount of dissolved oxygen in the water were deployed near the sewage outfall to look for signs of oxygen depletion or hypoxia. These two moorings—at Macaulay Point and Victoria Sill—complement a set of three other identical moorings that ONC had deployed in the fall of 2012 in western Juan de Fuca Strait and Boundary Pass. Together, the set of five moorings collect the longest continuous electronic time series measuring dissolved oxygen in the region.

Map of Ocean Networks Canada installations in the Salish Sea.

The analysis of this and other data have become a main part of Jeremy Krogh’s University of Victoria Master’s degree research. Jeremy recently presented preliminary results at the 2016 Eastern Pacific Ocean Conference in Oregon. 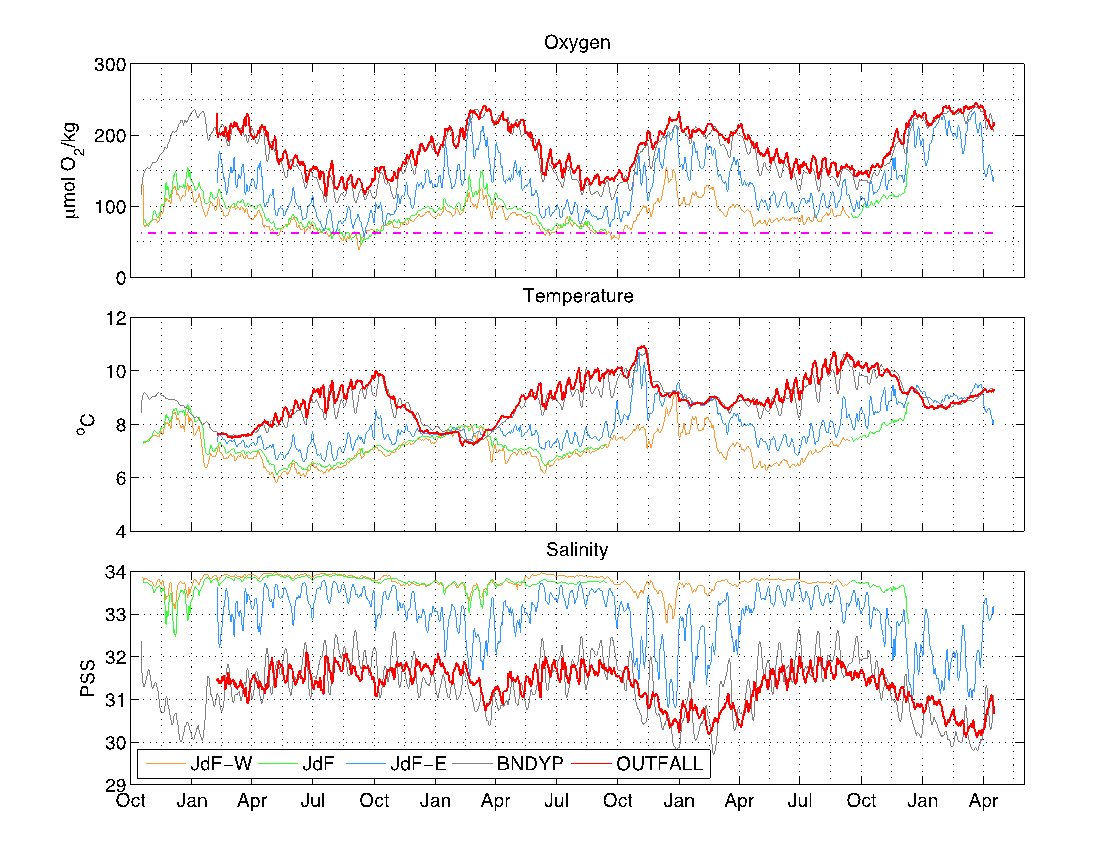 Time series from the fall of 2012 to the spring of 2016. Moorings are located at Juan de Fuca Canyon (JdF-W), Juan de Fuca Centre Strait (JdF), Victoria Sill (JdF-E), Boundary Pass (BNDYP), and at the sewage outfall Macaulay Point (see map). The horizontal magenta line in the oxygen plots shows the hypoxic threshold, below which many organisms experience severe low oxygen stress. The warm temperatures observed in the winters of 2014/2015 and 2015/2016 are due to a regional warm anomaly in the North East Pacific known as “the blob”, and are not related to sewage outfall.

Jeremy’s research reveals that the data from the mooring near the sewage outfall has the highest level of dissolved oxygen of any of the moorings and is well above hypoxic limits. Further work has also shown that oxygen depletion in the area immediately around the sewage outfalls is nearly undetectable and on the order of only 1% below its natural state.