Interconnections Among the Seafloor, Ocean, and Atmosphere

Ocean Networks Canada observatories encompass a variety of oceanic environments. There are observatory nodes in active seafloor spreading regions that exhibit volcanic activity and hydrothermal venting and in continental slope environments that display active gas venting and where gas hydrates are exposed on the seafloor. The area covered by the observatories also contains an anoxic basin and swift-current-dominated straits with tidally driven turbidity events. Chemical and biological constituents are exchanged between these seafloor environments and the overlying water column. Some materials reach the ocean–atmosphere boundary where further complex interactions occur. For example, precipitation and evaporation modulate ocean salinity, waves heavily influence heat and gas exchange, particulates deposited onto the ocean from the atmosphere change surface ocean properties, and particulates injected into the atmosphere from the ocean aid in cloud formation.

Question 10: What are the mechanisms and magnitude of chemical and heat exchanges between the oceanic crust and seawater?

Void spaces and cracks in newly formed oceanic crust are filled with seawater. As seawater flows through this basaltic rock, driven by heat from subseafloor magma, it partially dissolves the rock, picking up chemical compounds. These heated, metal- and gas-rich fluids vent at the seafloor at mid-ocean ridges and on seamounts scattered throughout the ocean, contributing to the large chemical fluxes between oceanic crust and overlying seawater. Low-temperature vents are estimated to account for up to three orders of magnitude more fluid circulation than is exchanged at high-temperature black smoker vents.

Among mid-ocean ridge systems, Endeavour Segment of the Juan de Fuca Ridge is one of the best studied. The COVIS instrument, currently located at Endeavour Segment, measures fluxes from the seafloor into the water column using acoustic imagery. Sensors that determine fluid constituents and thermal fluxes should be expanded. On the eastern flank of the Juan de Fuca Ridge, Ocean Networks Canada monitors existing CORKed boreholes to understand complex subseafloor hydrology. New connections to existing CORKs would add to this long-term hydrologic observatory.

Question 11: In what ways do upper ocean processes influence the formation of aerosols?

In situ measurements of surface ocean conditions are still rare, particularly during high-wind-speed events. Ocean-derived aerosols are some of the most important inputs to Earth’s radiative budget, biogeochemical cycles, and ecosystems. Marine aerosol production from sea spray occurs at submicrometre particle scales and is affected by wind speed, sea surface temperature, and the biochemical composition of the source seawater. The source seawater is thought to be the surface ocean microlayer, which concentrates organic matter. There are almost no quantitative measurements of marine aerosol source components or processes involved in their production, despite the fact that this phenomenon may be a significant input to climate models. For example, bubbles and foam are known to play significant roles in aerosol formation. Key foam parameters that need to be quantified include their areal coverage and persistence.

VENUS’s CODAR and ferry observations provide these data for the Strait of Georgia, but advancing knowledge of ocean-derived aerosols requires the addition of a radar system in the more open ocean. Photographic measurements can record the extent and persistence of foam. Hyperspectral remote sensing provides useful information on surface biology that is also related to surface chemistry. To complement the radar measurements and to augment the existing data on aerosols, NEPTUNE and VENUS could expand the mobile asset fleet, such as with unmanned aerial vehicles (UAVs) and surface gliders, each outfitted with a lightweight optical particle spectrometer that would record aerosol particle distributions over a wide range of sea states.

Question 12: How large is the flux of methane from the seafloor to the atmosphere?

Fluids expelled during subduction-driven sediment compaction drive an active hydrogeologic system on the Cascadia margin. The discharge of carbon-rich gases and fluids from the seafloor affects marine ecology, ocean chemistry, and atmospheric composition. Methane expelled at micro- and macro-seeps, mud volcanoes, and other seafloor features is now considered the second largest natural source of atmospheric methane after wetlands and is a potentially important contributor to global warming. Seafloor methane flux estimates range from 40 to 60 Tg/yr. Thus, changes in the flux of methane from geological sources must be determined and included in estimates of the global atmospheric methane budget.

Clayoquot Slope (ODP Site 889) and Barkley Canyon areas host buried and outcropping methane hydrate. Experiments to estimate methane flux from the seafloor are already in place using Wally, but improved measurements using mass spectrometry would enable quantification of hydrate composition and fluxes. Sector scanning sonar and other in situ seafloor mapping systems are ideally suited for repeated measurements of the changing shape and size of carbonate-crusted hydrate mounds. Cameras and passive acoustics can be used to document bubble flux from the seafloor into the water column and active acoustic sensors can measure the fate of bubbles during buoyant ascent. Fluxes across the ocean-atmosphere boundary can be studied by adding surface gliders and regular, repeat UAV overflights at Barkley Canyon and Clayoquot Slope. UAVs are currently being tested in the NEPTUNE area.

Question 13: What are the advantages and risks of ocean geoengineering to mitigate climate change?

Sequestration of excess CO2 associated with fossil fuel emissions is viewed as one of the best approaches for mitigating climate change. Two of the mitigation mechanisms considered by the scientific and geoengineering communities are of interest to Ocean Networks Canada. First is to inject CO2 into voids in young basalt because of its vast reservoir capacity. Oceanic crust has closed circulation pathways that stabilize CO2 through chemical reactions, and there is low risk of post-injection leakage back into the ocean and ultimately into the atmosphere. A second mechanism proposed by the geoengineering research community is to increase the amount of solar radiation reflected back into space through increasing cloud cover generated by emitting sea spray into the marine boundary layer from wind-powered ships. It is hypothesized that these artificial aerosols would act as cloud condensation nuclei, increasing the density of marine stratocumulus clouds and albedo.

NEPTUNE has the potential to support ocean-related geoengineering research to assess approaches to carbon sequestration and aerosol generation and their environmental implications. For example, existing or new boreholes on the network could be used as test CO2 injection wells, with associated seafloor and borehole sensors recording numerous variables pre- and post-injection over the long term. Surface artificial aerosol experiments could be conducted in an open sea area where long-term monitoring could document impacts on the ecosystem. This latter method does not necessarily reduce the invasion of excess atmospheric CO2 into the ocean, which is currently reducing the ocean’s pH. 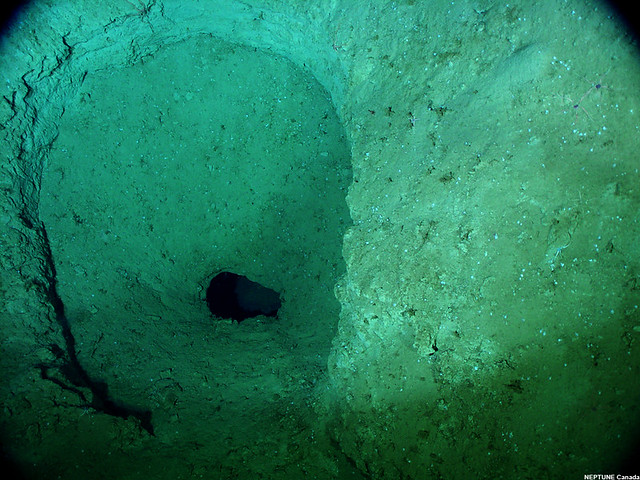