Although humans live in a world dictated by the steady march of time, and that we typically experience events in the time domain, there is an alternate realm in which periodic time series can be analyzed. Apart from the mean and trend, more complex and periodic characteristics of a time series may be revealed by analyzing the frequency content of the data. For ocean sciences, this type of analysis can be divided into two branches: spectral analysis and harmonic analysis. Both have the intent to extract information about the magnitude and relations of the periodicity, or repeated nature of signals in the time series. Recently, more advanced techniques, such as wavelet analysis, have aided some investigations, but they are beyond the scope of this brief explanation. 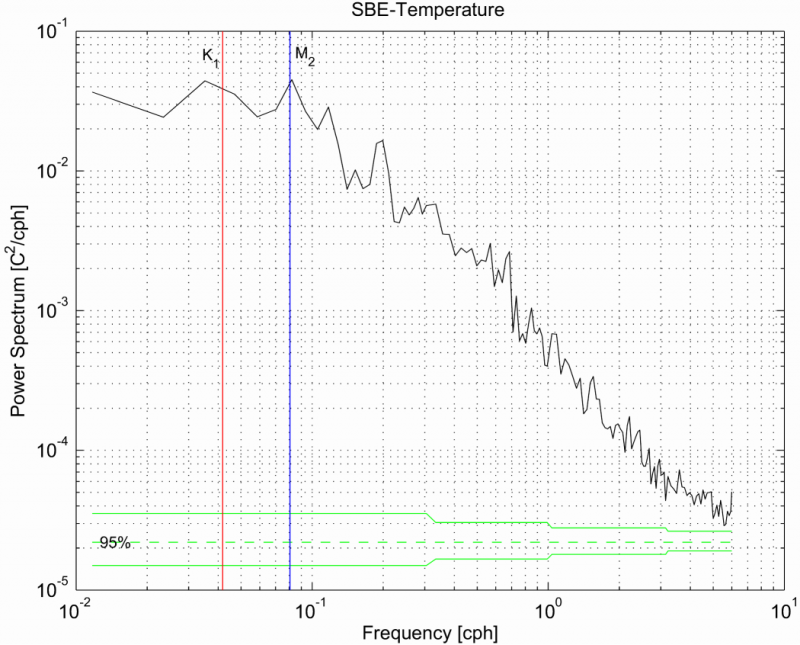 Once the mean and linear trend of a time series have been removed (subtracted from the original time series), many of the remaining fluctuations can be characterized by examining the periodicity of the fluctuations. These are the portions of the signal that repeat at fixed, or even variable, intervals. In spectral analysis, it is assumed that the fluctuations can be represented by simple cosine (or sine) wave functions [Acos(ω+φ)] at specific frequencies (ω) and yet to be determined amplitudes (A) and phases (φ). The frequency of a cosine is the measure of how often a peak occurs (i.e. 100 Hz is 100 times per second), the amplitude is half the peak-to-peak variation in the fluctuation, and the phase determines when best to start the cosine wave to fit the observed fluctuation. In Fourier spectral analysis, the fixed frequencies ωi are determined by the sample rate (which sets the highest frequency resolved) and the length of the time series (which determines the lowest frequency resolved). The Fourier analysis then determines the amplitudes and phases, and represents the wave functions as complex [Aei(ω+φ)] numbers. The Power Spectrum is the squared absolute values of the Fourier components determined by multiplying the component with its complex conjugate. We present a time series of spectra as a “spectrogram,” which can be viewed as an image with time along the x axis, frequency along the y axis, and colour representing the spectral amplitude. 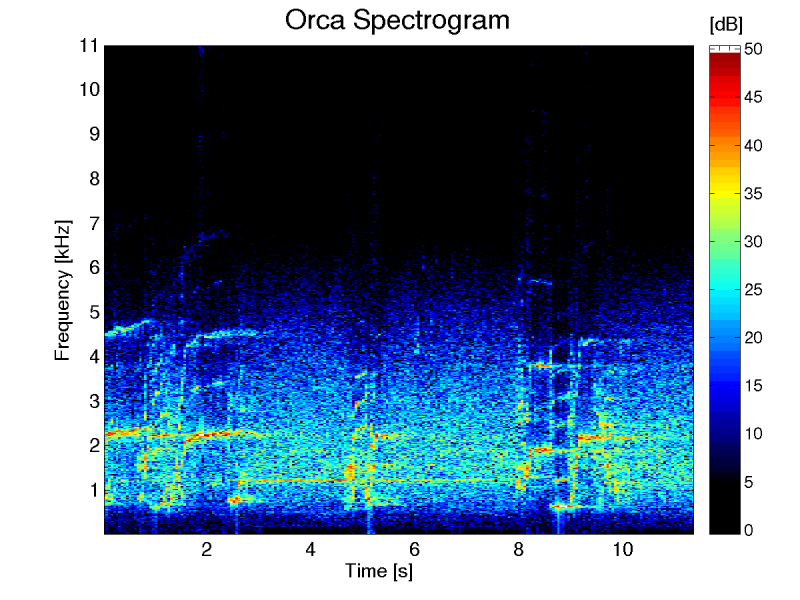 Harmonic analysis is similar to Fourier analysis, but rather than letting the sample rate and length of the time series determine the evenly spaced frequencies, a set of specified frequencies are chosen according to some user specified/external criteria, and then the analysis is used to determine the amplitudes and phases for the selected frequencies. One of the best known examples of this is used to analyze a pressure or current record for Tides. The tides are a consequence of the gravitational attraction of the Moon and Sun on the Earth and Ocean. Since the period of the orbits of the Moon and Sun, and their relative positions over the surface of the Earth are known from astronomical observations, the “tidal harmonics” (frequencies) are fixed (and known). A complete tidal analysis may include more than 60 harmonic constituents. The results of such an analysis are the amplitudes and phases of the known tidal constituents. Because some of the harmonics are very close in frequency, improved accuracy in the analysis is gained by using very long (>year) time series. Once the constituent amplitudes and phases are known for any one geographic location, then the tides for that location can be predicted, either for the past or into the future for that location.