Tides are a result of the gravitational attraction of the Moon and Sun on the Earth and ocean.

Tidal forces are a result of small gradients in the gravitational field. Tidal dynamics can be viewed in two reference frames: a non-inertial (accelerating) rotating frame relative to the center of mass of either the Earth-Moon or Earth-Sun systems, or the inertial non-rotating frame of reference (i.e. fixed with respect to the stars).

In the Earth-centric non-inertial reference frame, the net tidal forces can, for interpretation purposes, be divided into two parts; the gravitational attractive force of the ocean towards the center of the Moon or Sun, respectively, and a centripetal force which results from the fact the Earth-Moon-Sun systems of orbiting/rotating bodies have fictitious centrifugal (inertial) accelerations.

As the spinning Earth-Moon and Earth-Sun systems rotate about the centers of mass, there is an effective balance between the gravitational attraction and the outward centrifugal force. However, the finite size of the Earth means that the gravitational component of the force, which varies inversely with the square of the distance, varies from stronger on the near side (towards the satellite) to weaker on the far side (away from the satellite). The sum of these un-equal force vectors results in two primary “bulges” in the ocean for each satellite: two associated with the Moon and two associated with the Sun. In simple terms, one “bulge” is directed towards each associated satellite (Moon or Sun), the second bulge is directed away from each satellite (see figure to the left). The Earth then spins on its axis under-neath these bulges.

An alternate, but more rigorous approach is to calculate the gravitational potential, or tidal gradient associated with the forces of gravity from either the Moon and/or the Sun on the Earth and ocean from an inertial (non-rotating/non-accelerating) reference frame. The net result is the same set of net tidal forces (red vectors), which result in two bulges of high water directed both towards and way from each satellite (Moon and Sun).

The upper figure shows the forces associated with either the Moon or Sun. Even though the Sun is significantly more massive than the Moon, the relative size of the bulges caused by the tidal potential associated with the Sun are ~50% smaller because of the great distance between the Sun and the Earth. Note also that the tides are larger near the orbital planes (along the ecliptic) than they are near the poles. Because the Earth is tilted on it’s axis, the ecliptic is inclined 23.4 degrees from the equator. Consequently, mid-latitudes (including the coastal waters of British Columbia) tend to have larger tidal variations near the winter and summer solstices.

Two high tides and two low tides each 24 hours are not necessarily experienced at all locations. The “bulges” are broken by the continents into long wavelength “shallow water waves” that propagate around nodal points located far from shore. At any location on the Globe, the effective tides might be “diurnal” (once a day), “semidiurnal” (twice a day), or “mixed” (varying between diurnal and semidiurnal). The lower figure shows the dominant tides througout the worlds oceans. Along the open coast of British Columbia, we typically experience semidiurnal tides. In-land basins, such as the Strait of Georgia, can experience even more complex tides as the “tidal wave” causes high and low water at remote entrances, such as the Strait of Juan de Fuca and Johnstone Strait, and the tidal elevations propagate through complex islands and channels to affect the water level and currents locally. 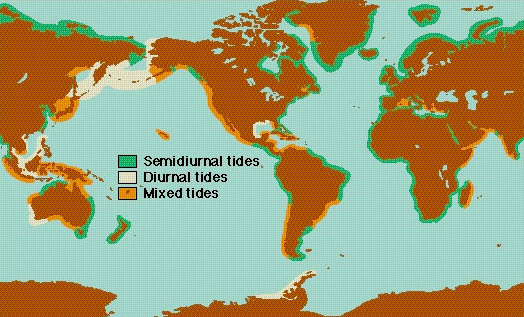 In addition, however, the Earth is tilted on it’s axis, which is what causes the seasons, but also affects the tides in an interesting way. In the Northern Hemisphere (NH) summer (June 21), the Sun sits above 23 degrees North, while in the NH winter (Dec 21), it is directly above 23 degrees South. Therefore the tidal bulges towards/away from the Sun also shift with the seasons. In the NH summer, the Sun’s “towards” bulge occurs during the day while the Sun is overhead, while during the winter, when the sun is in the SH, the “away” bulge occurs at night when the Sun is on the opposite side of the Earth. Therefore we (Ocean Networks Canada) experience the largest tides in June and December, but they are out of phase (day to night) because the Sun has shifted hemispheres. Around Victoria, we therefore see the lowest tides in December during the night, while the lowest tides in the summer occur during the day. In actual fact, the local timing (when during the day) these “seasonal” low tides occur varies around the globe as a function of the local bathymetry and larger tidal patterns.