A “time series” is a set of measured values separated by regular, or irregular, intervals in time. An example might be the temperature recorded from a thermistor every minute. The resulting time series, when plotted, will show how the temperature varied over time. The statistics of these variations are often of great interest. If it is a long record (i.e. decades), it might reveal climate variations. Short records might show daily heating and cooling, or the influence of mixing. Intermediate length records might show seasonal variations. Simple statistics might include the mean (average), or trend (slope) of the time series. The mean and trend are the first and second modes of a time series. More advanced analysis, i.e. auto-correlations and spectral analysis, might reveal periodicity, or when analyzed in conjunction with other coincident time series, allow an interpretation of cause and effect. 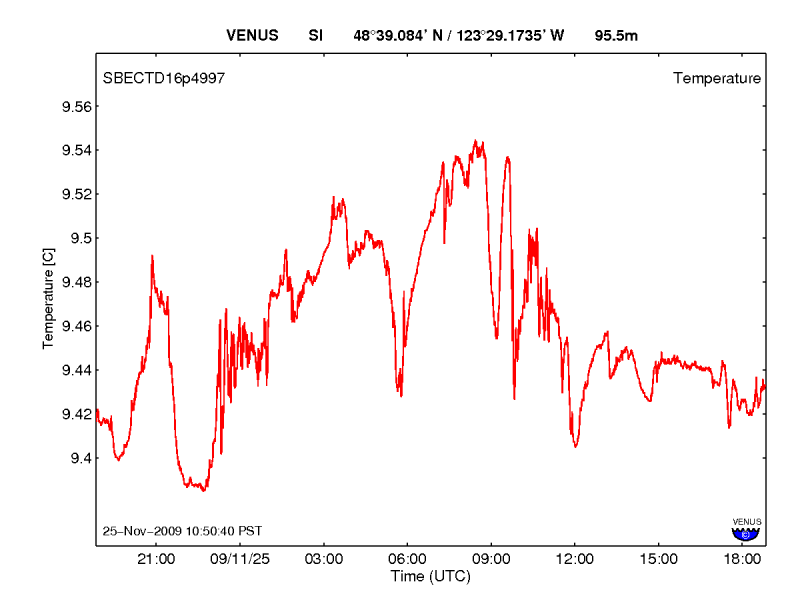 Whenever possible, it is desirable to record data values at regular intervals. In which case, a one minute time series should consist of a series of data values separated by exactly one minute, resulting in 60 measurements per hour, and 1440 per day. If a time series is regular, then the time interval is referred to at the “sample rate,” which, for example, could be measured in Hz (samples per second). Often, although a sensor may have a given sample rate, the data interval could be longer due to sample averaging. Many instruments have the built in capability of averaging a set of “raw” samples, resulting is a slower effective data rate. Averaging may be desirable if the raw samples are noisy (include random fluctuations).

Finally, there is a close and important set of relations between the sample rate and the underlying environmental process being investigated. If the sample rate and response time of the sensor are faster than any typical variation in the natural variable, then the time series will reveal all of the important information about variations in that variable. In fact, there is little point in sampling too fast (over-sampling), as most natural phenomena have inherent or integral time scales and it would represent a waste of system resources to sample very much faster than the integral time scale. However, if the sample rate is slower than the integral time scale of the natural system, then the variations will be “aliased” or under-sampled. The consequences of aliasing a process are that subsequent analyses may be severely hampered, and even misleading as natural periodicity will be shifted away from its true frequency to a false harmonic or frequency resolvable by the slow sample rate.