Life is usually thought to be driven by energy from the sun. The deep ocean is devoid of sunlight, yet life persists. While most of the abyss relies on photosynthetic surface productivity, hydrothermal vent communities use a different energy pathway, relying on a process called chemosynthesis. Specialized chemoautotrophic bacteria oxidize inorganic molecules contained in hydrothermal vent effluent and use the released energy to produce organic matter (carbohydrates) from dissolved CO2. 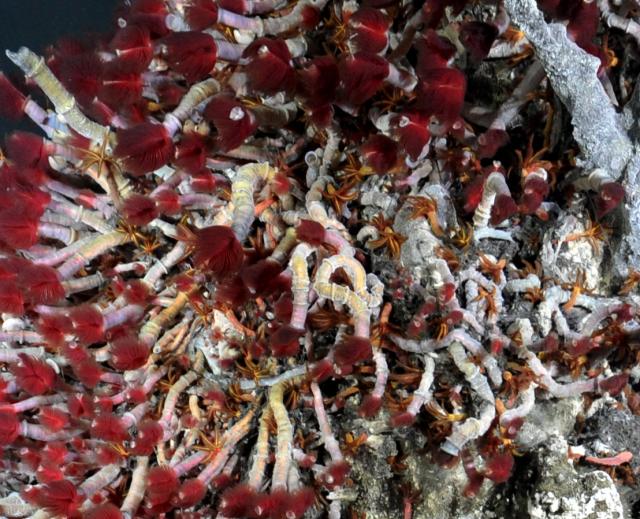 At these vents, bacteria oxidize hydrogen sulphide, a compound that is toxic to most forms of life. These bacteria, free-living or symbiotic, support an abundant and dense faunal community of mostly endemic species, by providing food for grazers, suspension- and deposit-feeders, or living in association with macrofaunal species as symbionts. One example of this association is the tubeworm Ridgeia piscesae, a keystone species that provides habitat for other members of this unique ecosystem. These worms have no gut and cannot feed on bacteria directly. Instead, chemotrophic bacteria live within the cells of a specialized part of the tubeworm’s body called the trophosome. The red gill plumes of the tubeworms are the result of their blood being very rich in haemoglobin, which absorbs and transfers oxygen and hydrogen sulphide that are dissolved in seawater to the bacteria in the trophosome.